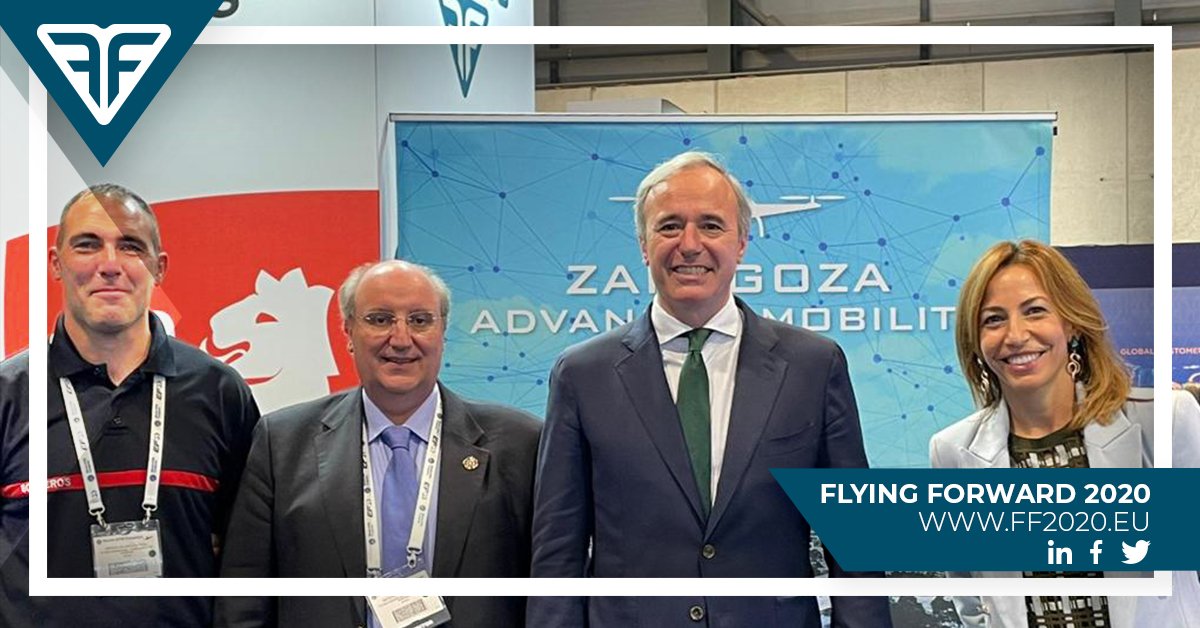 Flying Forward 2020 (FF2020) was present at the Expodrónica 2021 fair that was held at IFEMA (Madrid) between 26-28 October. The FF2020 Stand was attended by its consortium partners: EuroUSC Italia (Pasquale Capasso), Zaragoza City Council (Miguel Ángel Anía and 2 members of the drone unit of the Fire Service) and supporting partner Soros Gabinete (Ignacio García). Also present were the Mayor of Zaragoza (Jorge Azcón) and the Councillor of Public Services and Mobility (Natalia Chueca).

Expodrónica was developed jointly with the World ATM Congress and was inaugurated by King Felipe VI of Spain, having a worldwide impact with the presence of more than 6,000 visitors from 150 countries in 20,000 m2 of exhibition and 7 theatres for conferences and debates. During the 3 days of the event, numerous visitors (public bodies, drone manufacturers, service providers and different security bodies) learned about FF2020 and engaged with the activities being done by the project and Zaragoza City Council in the field of Urban Air Mobility (UAM).

More than 200 brochures explaining the project were delivered and a video was shown that summarises the FF2020 project in general, complemented by images of Zaragoza taken with drones. FF2020 participated in two conference theatres and hall debates.

On the 26th, the Mayor of Zaragoza presented the challenges that UAM poses for cities and explained what the demonstration of Zaragoza consists of within the framework of the FF2020 project. At the panel discussion, he was accompanied by Vassilis Agouridas (Airbus Urban Air Mobility) and Luis Moratinos (Ferrovial).

On the 27th, Pasquale Capasso presented in detail the FF2020 project at the Campfire Theatre.

Among the most relevant visits we can mention the following:

On the afternoon of the 27th, an air show was held at the Cuatro Vientos Air Base in which the most important novelties of unmanned aircraft could be observed.